All right, my fourth stop out of ten on this whole Ghost Poetry adventure is Monte Cristo Homestead in Junee, just North of Wagga Wagga.

Reportedly Australia’s most haunted house, this is my classic ‘Scooby Doo’ scary mansion stay. Built by the Crawleys (that’s right! a spooky name in itself) the homestead was not a very happy place. There was the tragic death of an infant that fell (or was pushed) down the stairwell. There was the man kept chained to the wall like an animal for forty years, and in 1961 there was the terrible murder of the caretaker who was shot by a local teenager.

Check out the website below for more tragic stories and for all of the weird activity associated with this place. The current owners, Reg & Olive, run tours and B&Bs if you’re looking to pass through.

Also check out their link to the stuntman Lawrence Legend. This is their son who grew up in the house and now lives next door. Being a death-defying stuntman he once jumped over the Monte Cristo on his motorbike.

wish me luck now... I will be packing lots of Scooby Snacks. And stay tune.. I will have news on my next six haunted visits. there are good ones still on the cards.
Posted by nathan curnow at 10:55 PM No comments: 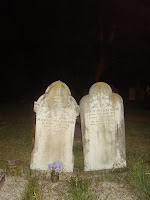 Home from spending a couple of days at Picton. Met up with Liz Vincent who was a terrific host. I did two of her tours, along with around 40 others each night. But the highlight of the tours was of course Picton Tunnel. A disused railway tunnel since 1919 this foreboding structure was used for weapons storage during WW2 and as a mushroom farm for 20 years. But in 1916 it trapped Emily Bollard who was walking through to visit her brother on the other side. Struck by the train from Thirlmere her body was carried all the way out to the road. Others claim her body had to be collected piece by piece.

Standing in the middle of the tunnel with 40 other strangers can be a pretty nervewracking experience. I’ve never felt so much nervous energy, just waiting in the dark for something to happen. At times it was like a slumber party: all excited about being together.

Each entrance was 300 feet away, we were smack bang in the middle of it. There was no escaping whatever was about to happen.

Then we all began to see flashes of light. Small pin-prick bursts, like raw electricity, as if a fuse was blowing. I saw a blue one, then red. It’s hard to say what they were… I’m finding the only way to explain these experiences is through inadequate similes. Ah, the challenge of poetry.

Some people by then were sitting down on the dirt floor. We were all gathered across the full width of the tunnel. Then suddenly, out of nowhere, four orange lights appeared to be moving towards us and everyone dove for the walls. It seemed a truck or a train was coming for us, about to mow us all down. Everybody screamed and hit their torches and I found a youg teenage girl virtually on my feet, cowering up against the wall. Of course whatever it was had disappeared as quickly as it had come.

I walked out of there totally amazed at what had occurred and was dying to visit again. As it happens the following night threw most of that into question and I came away from Picton more confused than ever.

What I am sure of though was that I saw two bursts of light… one blue, one red, which were very strange.
Oh, and a big thankyou to Ali Jane Smith for putting me up in Wollongong... check out her site in my links section. She has a book out titled Gala.
Will post pics of Picton Tunnel soon... and stay tune for details on my next ghost visit.
Posted by nathan curnow at 10:53 PM 1 comment:

Hi
I am heading off to the town of Picton this week... next stop on my Ghost Poetry Project.
For those who came late, I have been funded by the Australia Council to stay at ten haunted sites around the country and write a new collection of poetry based on my experiences.

Picton is my third stop so far. It is one hour from Sydney and said to be the most haunted town in Australia. It boasts over 20 haunted sites. These include the picton tunnel, the cemetery and various hotels/cottages which I will be visiting. I am also staying in room 11 at a local inn which is said to have a glowing crucifix inexplicably appear upon the wall.

For more info on haunted Picton check out these links:

I will let you know how the visit goes, but if you've visited Picton in the past feel free to post comments on your impressions.
Posted by nathan curnow at 10:50 PM No comments: